As mentioned in our previous Blog, various CI/CD tools have emerged in the market recently. Each tool comes up with different features and aspects. Consequently, this CI/CD Blog-Series is introduced in order to investigate the usage of different tools in that area.

This Blogpost is the second in the CI/CD Blog-Series and within it we will set up a CI/CD pipeline for a containerized (Docker) application on Kubernetes using Bitbucket as a tool.

Please note that in the Blog, we will use Azure as a provider for our Kubernetes Cluster and a private Docker registry. However, you can use any Kubernetes Cluster/Docker registry that you already have on any provider to complete the steps here. You don’t need to touch the application code. All you have to do is to is to configure the environment variables correctly giving them the suitable values and make some changes in the bitbucket-pipelines.yml file!

At the end of the post, you should be able to build a CI/CD pipeline for a sample spring-boot java application using one tool “Bitbucket”! The end goal is to automate the following process:

Once you have your kubernetes cluster and a container registry instance ready on azure, you need to create a Bitbucket Account in order to automate the workflow.

Create and Understand the Pipeline

Before we start with that, let’s understand some basics. Bitbucket Pipelines is an integrated CI/CD solution built into Bitbucket, which enables automatic building, testing and deployment of applications. This in turn means that you don’t have to put effort on installation or configuration of additional tools.

A major element of the Bitbucket pipeline is the bitbucket-pipelines.yml file, which contains all the build configurations and needs to be created in the root of your repository. Within that file, you can define different steps, such that each step starts a new Docker container that includes a clone of your repository. Inside each step, you can define a script that contains the list of commands you want to execute in sequence within the step (container).

As Bitbucket relies heavily on build containers, it requires that you build your pipeline in separate steps which in turn leads in creating fine granular pipelines. However, in case you need to exchange some artifacts between the different steps, you have to manage them.

Using Bitbucket, you can easily create a new Repository following these steps:

Now you need to “git clone” the Bitbucket repository to your local system, add the sample application folder to it, and “git push” the changes to Bitbucket again:

Let us now have a deep look into the content of the bitbucket-pipelines.yml file! But before we go more into the details, note that all the variables that are written in capital letters are environment variables which take their values by configuring them globally using Bitbucket.

In order to configure any environment variable using Bitbucket, follow these steps:

Now, let’s have a look on the different parts of the bitbucket-pipelines.yml file:

Now you can start your CI/CD journey! You can change something in your Bitbucket repository and commit it, then the build of the pipeline will start automatically in Bitbucket!

After it finishes, you should see a view similar to this, in which you can see the details of each step along with the Console Output of the build. 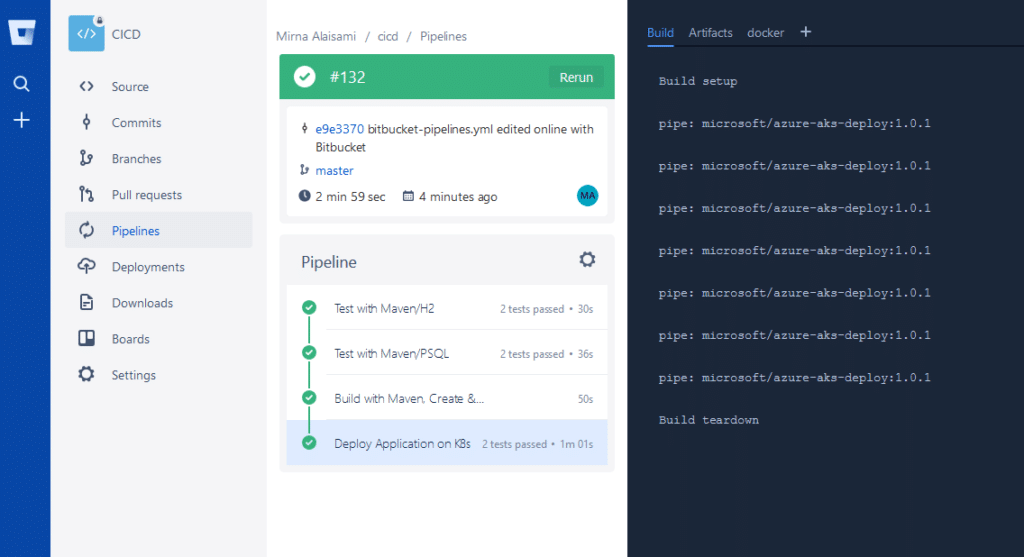 There you go! In this Blogpost, you have successfully created a CI/CD pipeline for a containerized spring-boot java application on Kubernetes using Bitbucket. In Part 3 of this Blog-Series which will follow soon, we will set up a CI/CD pipeline using Concourse CI as a tool.