The pooling operation used in convolutional neural networks is a big mistake and the fact that it works so well is a disaster.

This is a quote from Geoffrey Hinton, considered to be one of the most import researchers on AI and Deep Learning. In 2012, his student Alex Krizhevsky won the ImageNet challenge with the Convolutional Neural Network (CNN) AlexNet and layed ground for the success of CNNs in Computer Vision. So why does Hinton think that CNNs are bad?

What CNNs are bad at:

If you want to recap CNNs, I can recommend this article or take a look at this blogpost for a CNNs used for image classification.
Although CNNs achieve the best results in image classification, they are actually pretty bad in detecting objects in different poses. To achieve good performance a lot of training data is needed, and techniques like data augmentation are used.
This is because CNNs are not equivariant but invariant to pose changes. Equivariance means, that when the input changes, the output changes the same way. Invariance in contrast means, that when the input changes, the output doesn’t change. Because CNNs are made to be invariant, this makes them robust against translation changes. But other pose changes (like rotation, orientation) are not handled well.
This is because CNNs use pooling (e.g. max-pooling) to convey information from one layer to the next. CNNs detect certain features in an image, but through using a pooling layer valuable information gets lost.

What do we want instead:

What we want instead is equivariance. When the input changes, the output should change accordingly.

So how do Capsule Nets work?

If you are more hands on and want to immediately see an implementation, check out this jupyter notebook, in which I implemented a capsule network with pytorch.

In computer graphics, a picture is rendered from a lot of stored parameters. Capsule networks are going the other way round:  they infer instantiation parameters from an input image. So instead of only providing us a probability (as CNNs do), the output of a capsule network is a vector, Each capsule outputs a vector, where the length of the vector reflects the probability that an specific object is present, while the orientation encodes the instantiation parameters.

We have a triangle (blue) and a rectangle (red) capsule. We can see that activation (reflected by the length of the capsule vector) is higher where a rectangle and a triangle exits.

In the previous picture there were two different capsules, each is responsible for detecting a specific shape or object. Additionally capsule networks have a hierarchy: in lower levels simple shapes, whereas more complex objects are detected in higher levels.

The instantiation parameters encoded in the output vector can be: 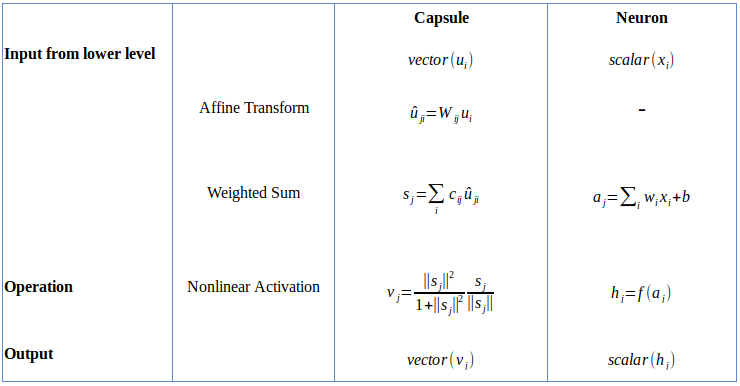 The main differences here are

Squashing is a special kind of normalization, i.e. it rescales the vector to a value between 0 and 1 while preserving its orientation. Thereby short vectors get shrunk to almost zero length, while long vectors get rescaled to values slightly below 1.

How does routing by agreement work?