This blog post described briefly some concepts to get started with (Red Hat) OpenShift Origin using Minishift. I will guide you through the process of deploying Minishift and some OpenShift related concepts.

I will review the following topics:

OpenShift allows the ability to easily deploy web application code directly using a library of pre-defined image builds or we can bring our own Docker images. With features such as persistent volumes, we are not limited to just running 12-factor or cloud native applications, but also deploy databases and many legacy applications.

There are 3 quick installation methods:

Docker and OpenShift Origin must run on the Linux operating system. If you wish to run the server from a Windows or Mac OS X you should go for the Vagrant flavour in method 3.

All of them requires some prerequisites on your hosts, which includes verifying system and environment requirements and installing and configuring Docker. So, only after ensuring your hosts are properly setup you could continue with one of them.

For production environments, several factors influence installation and the advanced installation method would be suitable:

The advanced installation method uses Ansible playbooks, so knowledge of Ansible is assumed. This is out of the scope of this blog entry…sorry guys.

I have chosen Minishift as our first option and I encourage you this option if you are approaching OpenShift for the very first time.

Please be advised that there are some references out there regarding OpenShift All-in-One VM, which is a VirtualBox VM packaged up and shipped using a Vagrant file. As of February 6th, 2017, OpenShift guys decided to retire the OpenShift All-in-One VM in favor of the Minishift option, please have a look at https://blog.openshift.com/goodbye-openshift-all-in-one-vm-hello-minishift/

Minishift requires a hypervisor to run the virtual machine containing OpenShift, so only 64 bits Operating Systems are allowed. Depending on your host operating system, you have the choice of the following hypervisors:

I will go throughout two different deployment options: Windows and Linux. I will show you that installing Minishift with the VirtualBox option as hypervisor is very easy and works the same way, regardless Windows or Linux. Installing using KVM as hypervisor implies further steps, but not too difficult.

For demonstration purposes, I will use the following user profile name: novatec

As we can expect, installing Minishift on Windows is quite straightforward. By default, Minishift will try to use Hyper-V as hypervisor on Windows, which is the Microsoft hypervisor solution implemented on Windows 7/8/10. This is an OS optional feature disabled by default which requires a reboot and have some further implications when enabled. For simplicity, I would encourage that you use VirtualBox as the hypervisor option on Windows. If you have Linux with VirtualBox, the installation works the same way, I will explain how to do it below.

In order to avoid a couple of bugs, you should check the following:

How to check %USERPROFILE%

Open a command prompt console and run the following command (in blue):

So far, so good. We are ready to go. Just follow these steps… 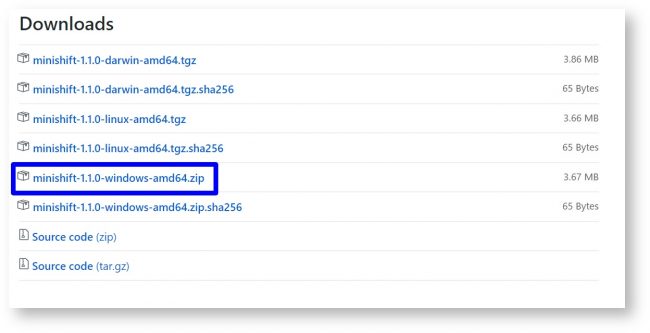 (Optional!) You might want to check the hash of the downloaded binary. This is very common in *NIX environments, but quite easy in Windows as well. Feel free. You might use your 7-Zip, right click on the zip file and choose CRC SHA → SHA256 and that´s it. For Windows lovers, Windows 10 includes a Powershell cmdlet, Get-FileHash, to do it. Not working on W7 because PS should be 4.0 or later.

There are multiple ways to achieve this, and there are minor differences between Windows 7, 8 or 10. Changes can be temporary or permanent, per user or per system, using the command line (set, setx, powershell..) or GUI.. To keep it simple, just modify the user environment variable using the GUI as shown below. 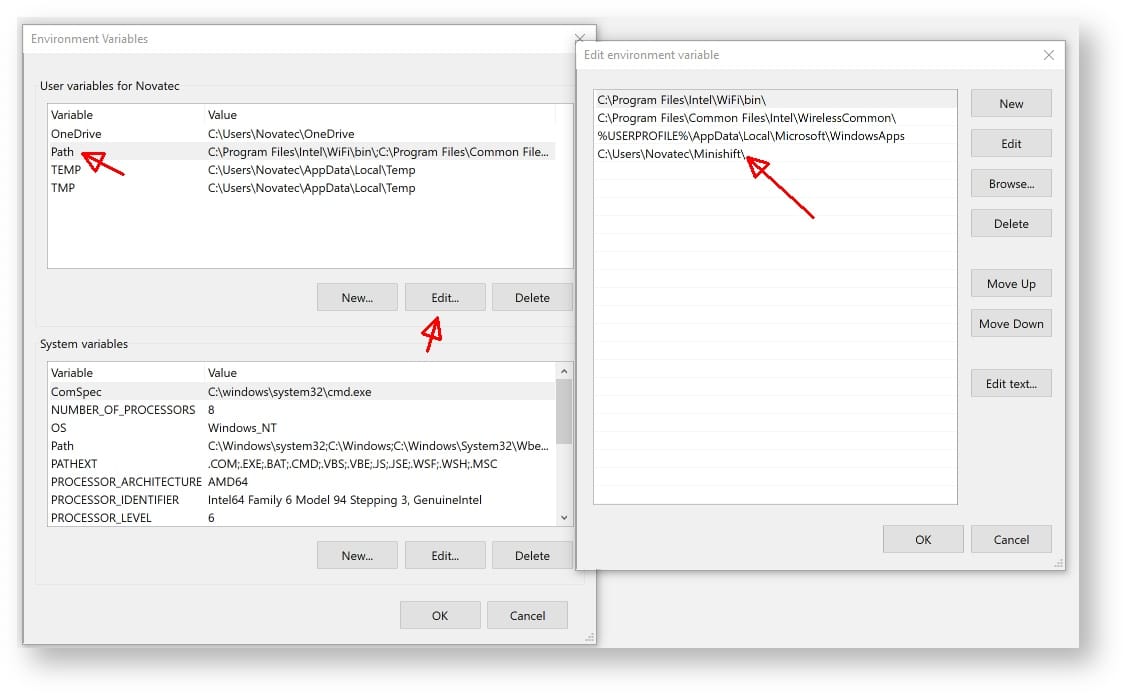 At this point, Minishift binary is performing many tasks in order to prepare our All-in-One VM environment. One of them is downloading the ISO image that the hypervisor uses to provision the Minishift VM.

Additionally, Minishift will download the OpenShift binary command-line tool, based on the version of the VM, which is called OC. It is written in Go programming language, so nothing to install.

(Note) It might be possible that Windows asks you for the following confirmation. This behavior is normal and expected. Do not worry if you do not receive this warning. When the Minishift binary runs for the very first time, it might require new Host-Only Virtual Box network interfaces to be created. 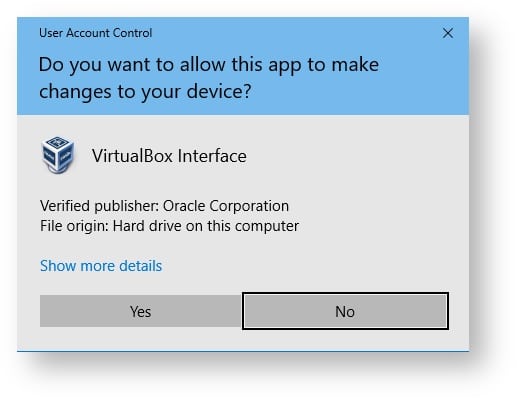 Finally, we will have something similar to this… Be aware of the server IP, URL and login credentials needed to interact with OpenShift Origin.

If you go to your Virtual Box Manager console, you will see a new running VM. 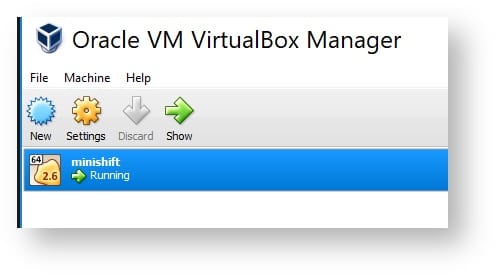 Now, we have Minishift running, however on Windows we will need an additional setup action: A path environment variable.

Remember, when you use Minishift, you interact with two components:

Just run the following command, minishift oc-env to display the command you need to type into your shell in order to add the oc binary to your PATH environment variable. The output is OS dependent, on Windows we will see something similar to this:

I have been working with Elementary OS for the last couple of years, so I will use it. It is an Ubuntu-based distribution.

We will be using KVM as hypervisor which is the default option for Minishift running under Linux.

Docker Machine is a tool that lets you install Docker Engine on virtual hosts, and manage the hosts with docker-machinecommands.

Minishift uses Docker Machine and its driver plugin architecture to provide a consistent way to manage the OpenShift VM. KVM driver requires specific installation and configuration steps, which are different between Linux flavours. I will focus on Ubuntu, for other distributions commands are different, it is up to you… For further info go to: https://docs.openshift.org/latest/minishift/getting-started/setting-up-driver-plugin.html

Note.- I will use jga as username in Linux.

i.e. the screenshot below shows an unsupported configuration, so we should figure out what is happening and solve before trying to use Minishift with kvm as hypervisor. Typical errors: Your system BIOS has no virtualization features enabled, Intel VT or AMD-V, or maybe your trying to use a nested virtualization which is not allowed with VirtualBox (Running a Linux OS on Windows Virtual Box). Other products such as VMware allows you to play with nested virtualization. As of this writing, VirtualBox cannot do it.

How to check CPU support

Just type the following command. If the output contains svm (AMD) or vmx (Intel), your CPU has virtualization support enabled. 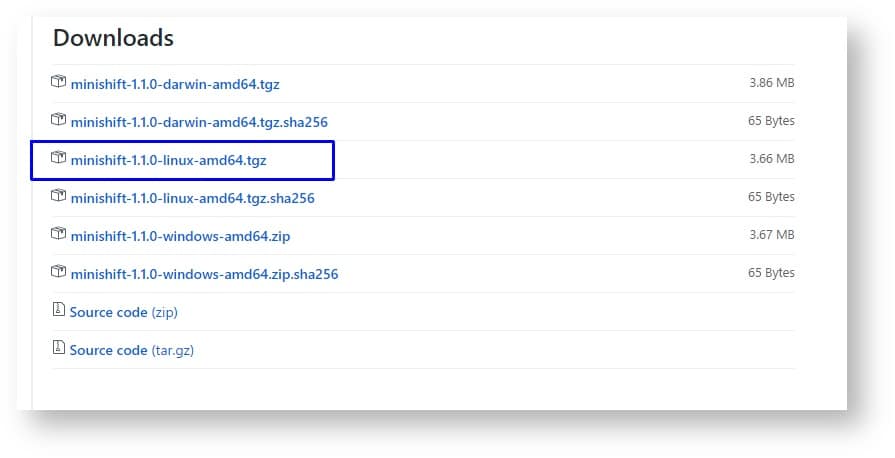 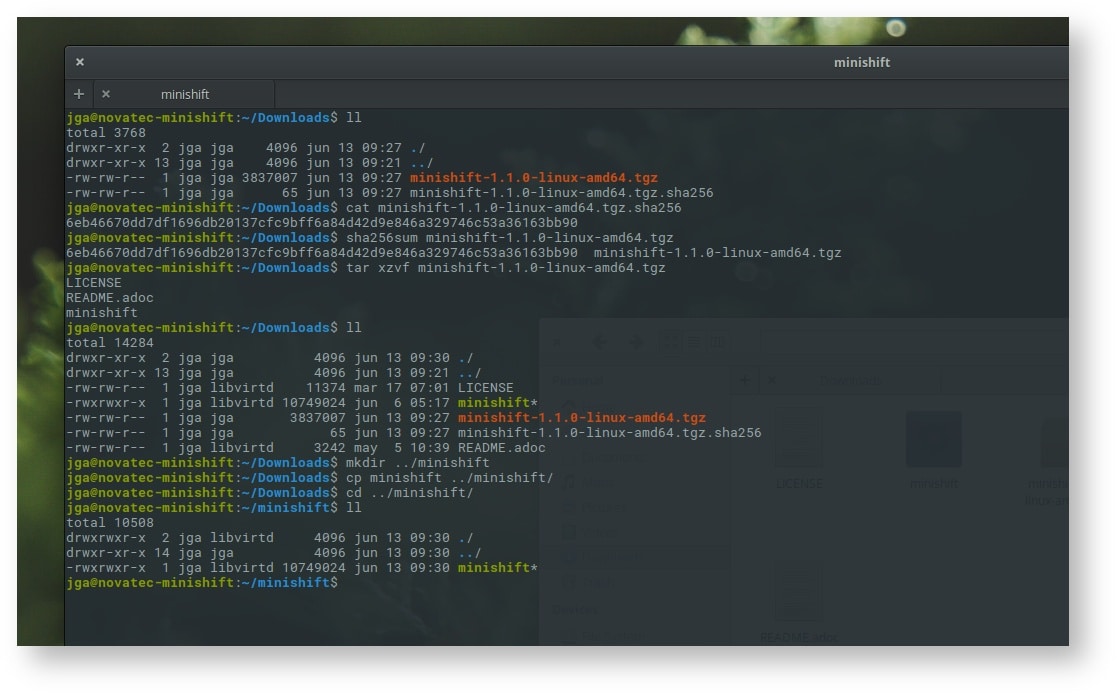 The binary will proceed with the required steps to provision your OpenShift Cluster. So, at this point, Minishift binary is performing many tasks in order to prepare our All-in-One VM environment, one of them is download the oc tools and the ISO. Remember that we have 2 ISO images available: Boot2Docker (Default) and CentOS. Please go back and read the Windows section (above) if you need further details. 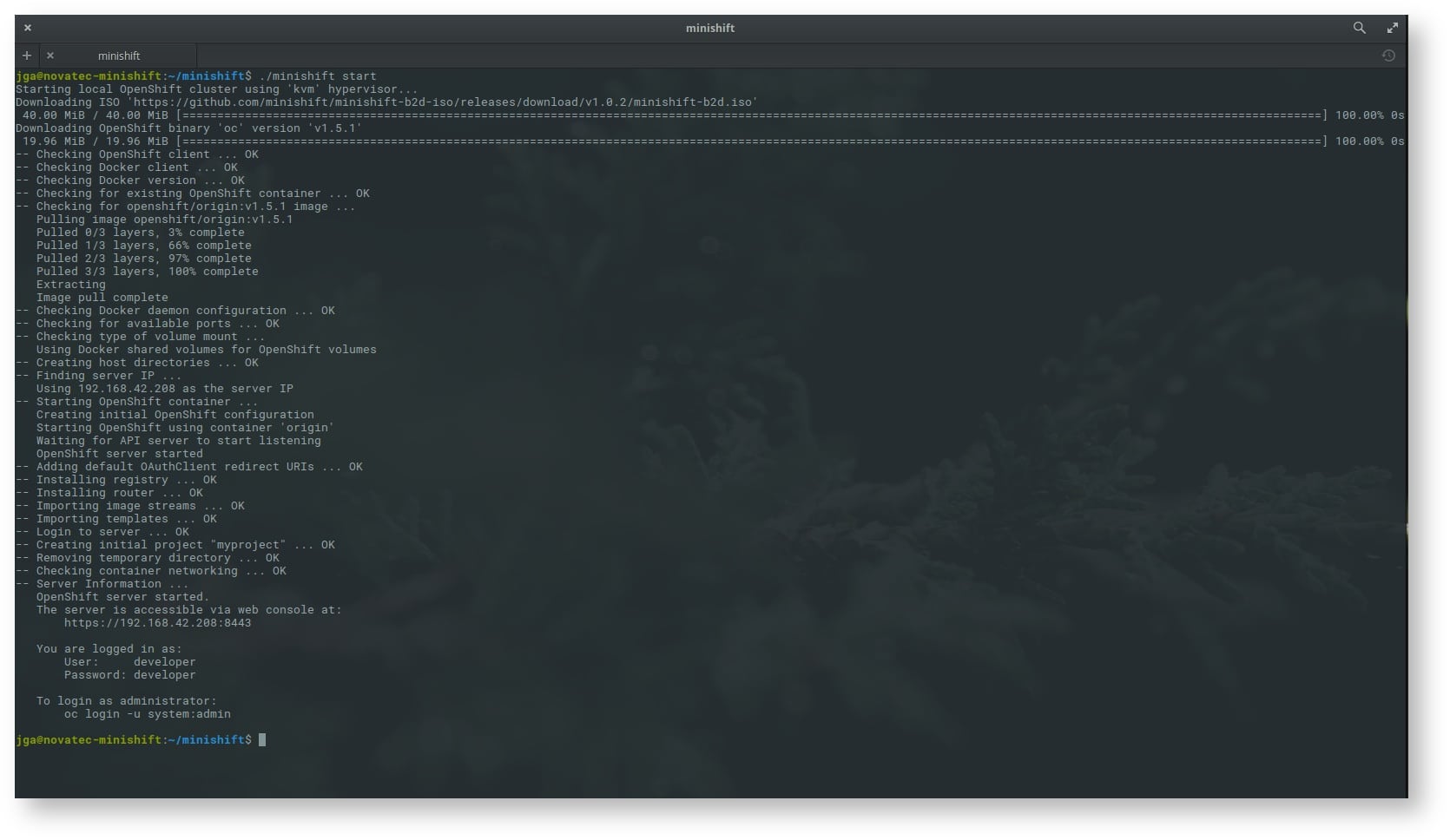 As we can see above, Minishift binary have downloaded and configured everything fully automated. Please note the IP and login credentials that should be used to connect.

When you use Minishift, you interact with two components:

Just run the following command, ./minishift oc-env to display the command you need to type into your shell in order to add the oc binary to your PATH environment variable.

Now, we can run oc commands and Minishift VM has been deployed successfully…

If you have VirtualBox on your linux machine (preferably 5.1.x), the installation of Minishift is as easier as on Windows. Pretty much the same process, obviously different minishit binary, the binary for Linux.

Note.- If you do not have VirtualBox, you can always download it at  https://www.virtualbox.org/wiki/Linux_Downloads

You should download the binary from the Minishift releases page. Available @ https://github.com/minishift/minishift/releases

Unzip it to your desired folder and…Now, just type..

Well..you should adjust your path environment variable as we explained above, if you want to use the oc commands.

Just run the following command, ./minishift oc-env to display the command you need to type into your shell in order to add the oc binary to your PATH environment variable.

As you know, we have two different command line tools, in one hand we have the tool called minishift. It has assisted us to create a provision a local, single-node OpenShift Origin cluster in a VM/KVM.  However, minishift has a lot of additional available commands to help us in interacting with and configure our local OpenShift instance: modifying, stopping, starting, deleting, and so on.. In the other hand, we have OpenShift client tools, called oc. With oc we are working directly with OpenShift, so we can create applications, manage projects, etc,etc.

So, we can work from the command line, web console, or via the Eclipse IDE using the latest JBoss tools. However, I am going to focus on using the cli tool and the web console here.

Now that we have everything in place let’s go ahead and login using the web console. …Hum…

what was the URL to connect to? No worries, Minishift will help you, just type the following command:

..and you will see the URL to connect to. In my case…

Do you prefer the GUI? 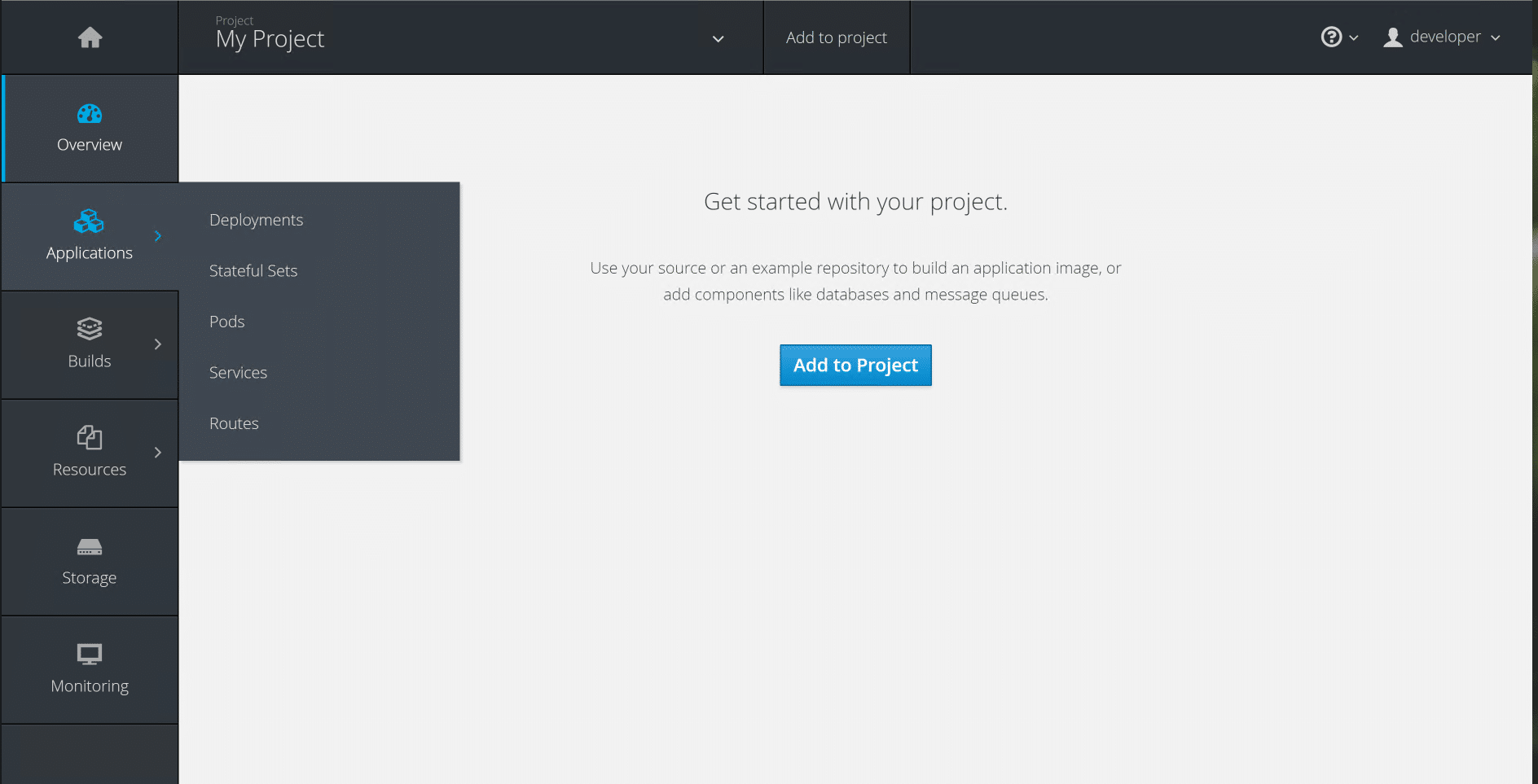 You can create a new OpenShift Origin application from components including source or binary code, images and/or templates by using either the OpenShift CLI or web console.

Creating from source code option show up one of the most powerful features of Openshift comes in with the Source-to-Image (S2I). It is a toolkit and workflow for building reproducible Docker images from source code. S2I produces ready-to-run images by injecting source code into a Docker container and letting the container prepare that source code for execution. What that means is that OpenShift only needs to know the URL of your git repository and then the platform takes care of the rest. Under the covers, when you create a new project and container, the platform matches a base image of the desired runtime up with your source, performs a build, and then creates a new Docker image on the fly.

Origin needs to know what kind of application it is, somehow. Origin attempts to determine the language builder to use by the presence of certain files in the root or specified context directory of the repository: 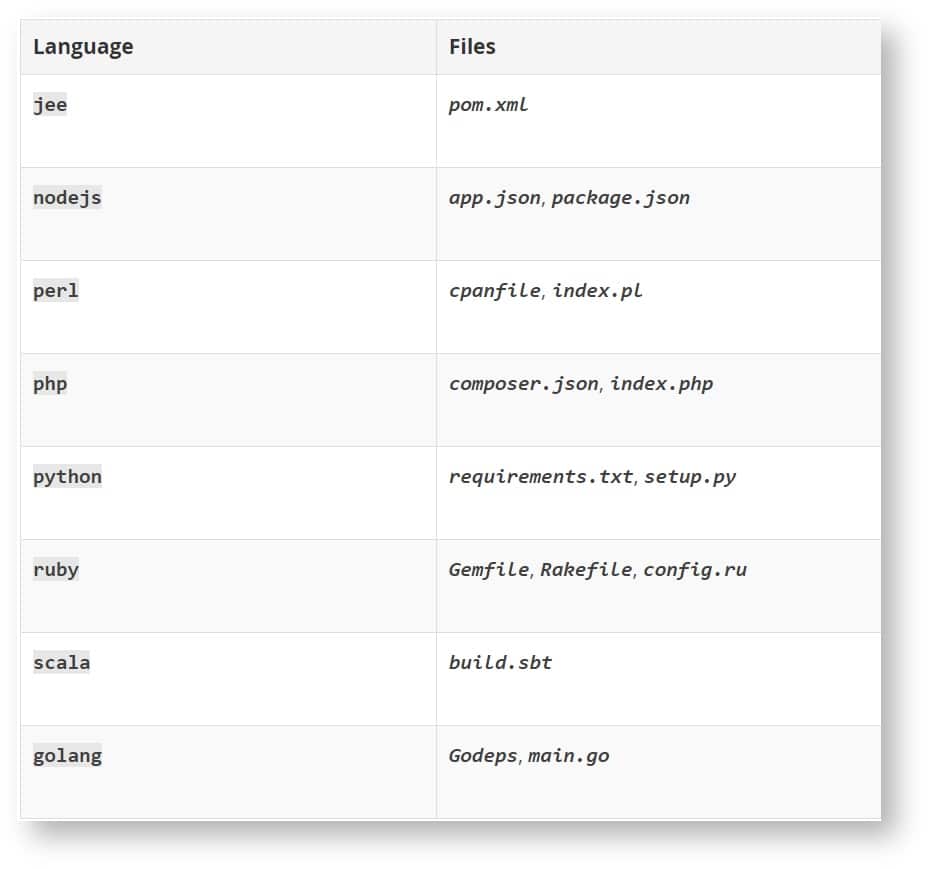 I will use a very basic Java application hello world application located a github.com. (forked from gshipley/book-helloworld)

So then, we are going to bring an existing application onto Origin using the web console.

If it supposed that we have a Project. Let’s click on Add to Project. 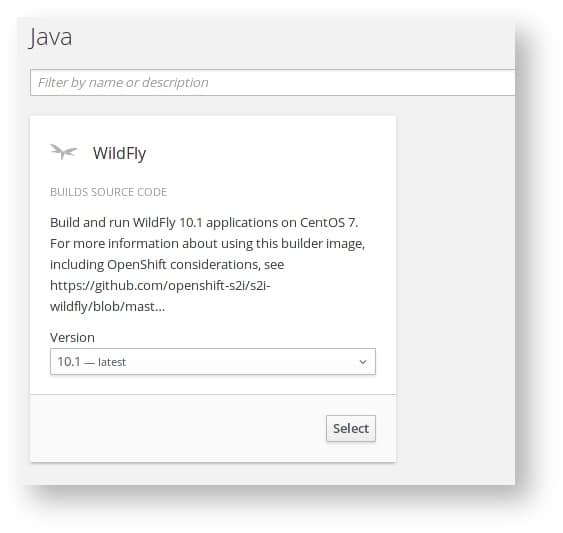 Now, Just copy&paste the GIT repository, in our case… I will use https://github.com/jmgalvez/book-helloworld.git 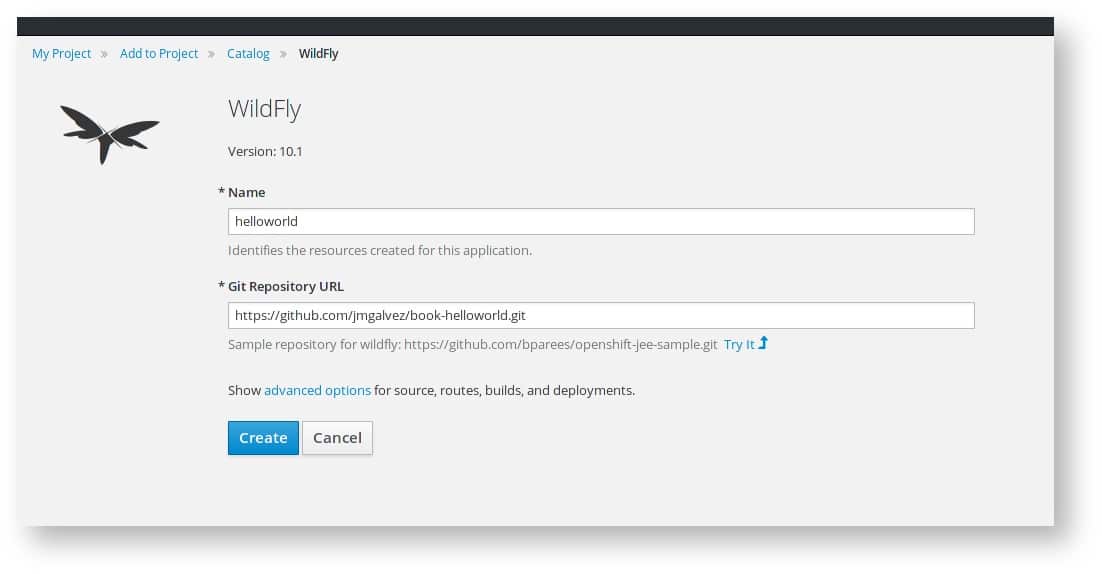 When you click on Create button you will see something similar to this:

At this point, S2I is executed, this may take a few minutes as the builder image is downloaded and the source code for the project is compiled: A new deployment will be created automatically once the build completes.

Note the info in the upper right hand of the screen.  The application has an associated route, which is the DNS name for our app in our local network (using the NIP.io domain).

At the end, we will see a blue indicator with 1 pod. App is ready !!

On your Minishift GUI, If you click on #1 link (Build HelloWord,#1), we will obtain some interesting detail about the build. Source type is git, build strategy is source and so on.

After a code change, we only need to git commit & push and come back here to create a new build. That’s all.

Data visualization with Kafka - How to use and connect Grafana to your...

Kafka Security – Behind the Scenes