This is the first in a small series of blog posts about Kubernetes Ingress Controllers. While later posts will deal with some specific implementations and their respective details, here I first start out by introducing the general picture and the basic concepts.

All contents presented here will be covered in more detail as part of the Novatec Cloud Platform Journey.

Kubernetes Ingress has finally been declared “stable”, i.e. having a well-defined API making it fully available for general use, with the release of Kubernetes v1.19 in August 2020. To summarize the upstream documentation, Ingress exposes routes from outside the cluster to services within the cluster, providing

And an Ingress Controller is the component that actually fulfills the Ingress.

What does that mean?

So, why would I even need anything like that? After all, I can easily expose Kubernetes workloads to the internet using a LoadBalancer Service with an external IP address.

Well, I can, but there are some severe limitations involved with that: while exposing a workload directly like this is really easy, and Kubernetes readily allows for balancing incoming connections over a number of worker containers, each such workload will stand alone on its own, having to individually implement additional features like encrypting traffic or access control by themselves, and each workload will thus not be easily integrated into a common setup.

Let’s imagine having a polyglot stack with an application implemented in several microservices, each written in a different language and thus each with a different type of server, and the need to offload traffic encryption or access control to a central interface, as opposed to implementing this individually in each microservice or server, becomes great indeed. And let’s imagine that these microservices each provide a specific subpart of a common API, e.g. one serving /api/customers/ and another one serving /api/orders/, I wouldn’t want to expose them on differing IP address but rather would like to see them consolidated below my.domain.io/api/ in order to comply with the Same-origin policy. 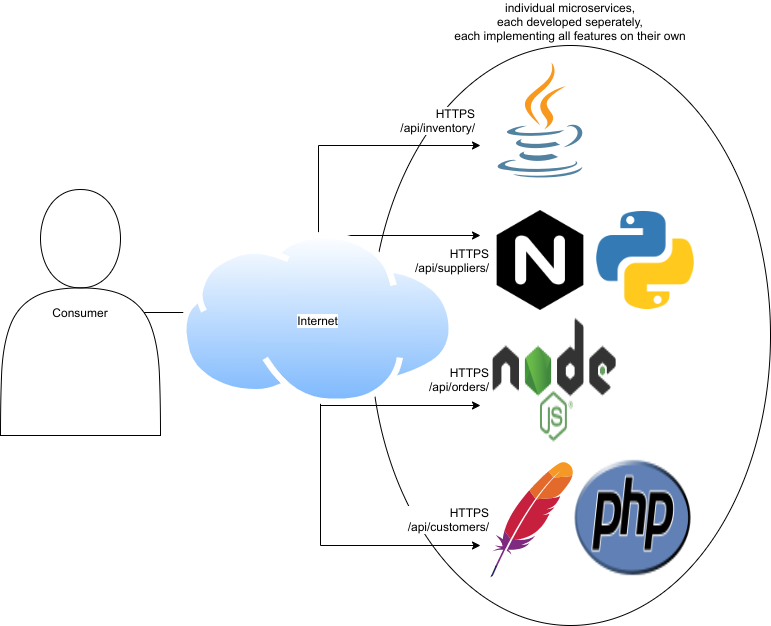 So what would I need instead?

I’m going to focus on a subset on the challenge first: consolidating separate microservices under a common IP address.

Let’s simulate two sample microservices using HashiCorp‘s http-echo container, making orders and customers endpoints each available in my Kubernetes cluster under their name and on TCP port 5678, and each just echoing what part they are supposed to handle:

No Service type has been specified, so these services will be created as ClusterIP services, making their workload only available from within the cluster.

For now I’d like to consolidate my various microservice subparts as mentioned above into a common setup. This can easily be achieved “manually” using a centralized entry point in form of a Reverse Proxy implemented using Nginx:

So, the (rather minimal) ConfigMap contents will be placed at /etc/nginx/nginx.conf in the container for Nginx to consume accordingly, configuring our Reverse Proxy as desired: each endpoint access will be proxied to the respective internal service. And this Reverse Proxy by itself will be made available for external access using a LoadBalancer service.

I.e. the Reverse Proxy LoadBalancer service is available on the external IP address 172.18.255.1 (external as understood by the sample cluster) on TCP port 80 (standard HTTP), whereas the microservice endpoints are only available cluster-internally via ClusterIP services. And for each component there is a pod running as mandated by the deployments configuration by way of replica sets (of course I could scale up the number of pods to avoid a Single Point of Failure, but that’s beyond the scope of this post).

And querying these sample services on the external IP address of the reverseproxy LoadBalancer service as listed above yields as follows:

So far so good: I can reach both endpoints, and both are available below the same IP address to which I could resolve a common domain. If I had created individual LoadBalancer services for each endpoint I would have ended up with separate IP addresses instead.

And the last line indicates that it is indeed Nginx which had been handling these requests.

Easy as this sample might be, it has some severe drawbacks:

Instead, it is far more convenient to consolidate all this functionality into a common tool: 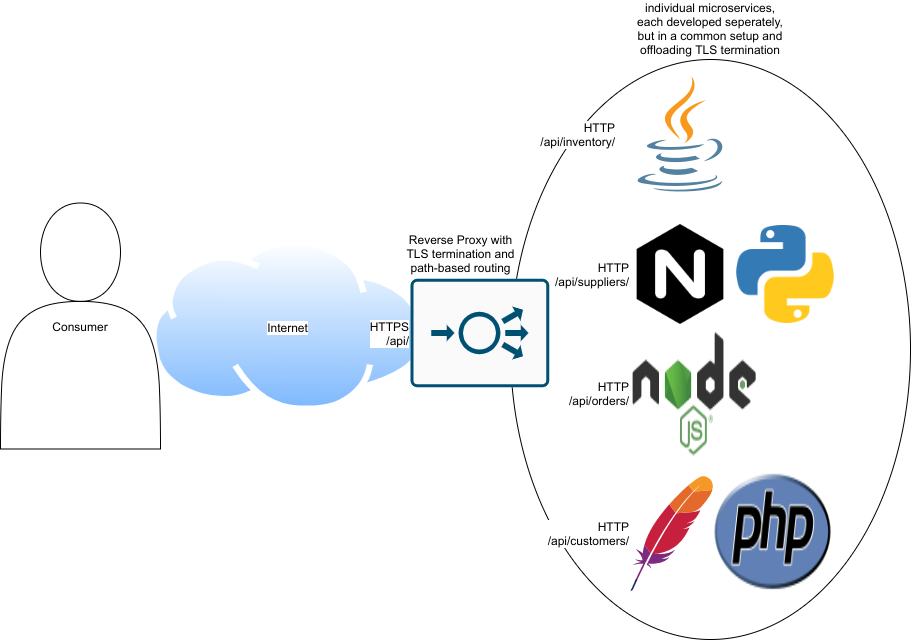 Ingress Controllers pick up the Ingress resources that will be fed into a Kubernetes cluster and combine those into a consolidated view about which routes will be allowed to pass from outside the Kubernetes cluster to services running inside the cluster and in what way. All Ingress Controller implementations should fulfill the basic reference specification, and in principle any number of Ingress Controller implementations can be deployed in a cluster, allowing to select the one that suits best individually per service and/or set a common default.

There is a wide array of implementations available. And some of those which are currently rather popular will be handled in more detail in follow-up blog posts.

This blog post here, on the other hand, was supposed to cover the general picture and the basic concepts, explaining the What and the Why of Ingress Controllers, and is thus just coming to an end now.

An Introduction to Event-Stream-Processing platforms