When trying to set up self-organizing teams, authority has to be handed over. Management 3.0 offers a very practical method to avoid chaos in this matter: Delegation Boards. A delegation board can be used to bring transparency into how the team takes on empowerment. This post shares our experience with this practice.

Our team consists of nine people, including me, the team’s manager. We are doing agile consulting, so usually we are helping customers during the week and use our Fridays to work together and learn from each other. This context framed our decision to use a Delegation Board and to determine which decisions to put on it. Here is the final result: 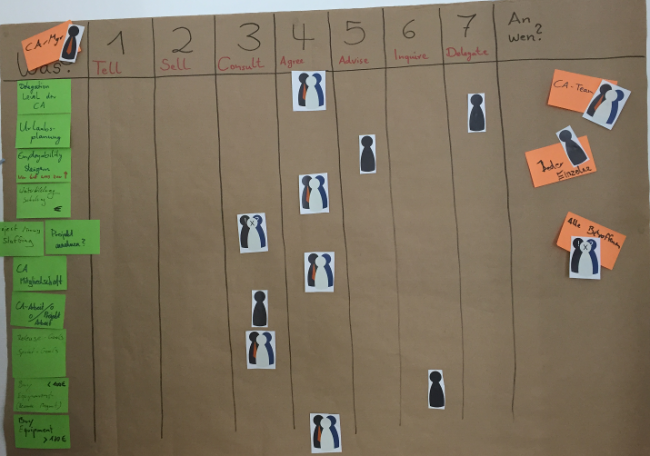 The first thing we did was to print out delegation cards. Then we put a brown paper onto the wall and created the 7-level-grid on it.

We discussed what each level means until we reached consensus. In the beginning, this was not easy, because we were not clear about the perspective from which the levels must be seen. Once we added the perspective (the one sharing his power), consensus followed quickly.

Tell: I tell the team what I decided and they have to go with it.

Sell: I make the decision, but I explain why I made it this way. Still, the team has to follow.

Consult: While I still make the decision, I will ask my team before I decide.

Agree: Both the team and I have to agree. So effectively, each has a right to veto, only consensus leads to a decision being made.

Advise: I will give my opinion to the team, but they decide and I have to follow.

Inquire: The team makes the decision, but I will ask about it and will be informed.

Delegate: I don’t even need to know about the decision, the team handles such matters themselves.

Once we understood all levels, a discussion on level four and higher embarked: Who exactly was the one being empowered? “The team” is such a vague term that it could mean anything and nothing. We reached the conclusion that, for our purposes, we needed three different groups who could be empowered:

We then started figuring out what level of empowerment was appropriate.

It took a while to get used to delegation poker, but finally we agreed on “Agree”. So both the team and I have a veto right, and neither they nor I can decide on a specific level without the other party. This felt better and more democratic than just leaving the power with the manager, so we were all happy. However, we still had to figure out who exactly would get the right to veto. The whole team? A subset of the team? Each individual?

We used three different corners in the room and started with multi-dimensional Delegation Poker: We not only had to show the card reflecting our opinion in numbers, we also had to walk to the corner signifying the group being empowered. This worked very well, and we soon had our first entry on the board:

Now that we were familiar with the practice, we first identified all types of decisions we thought we should discuss, which resulted in this table: 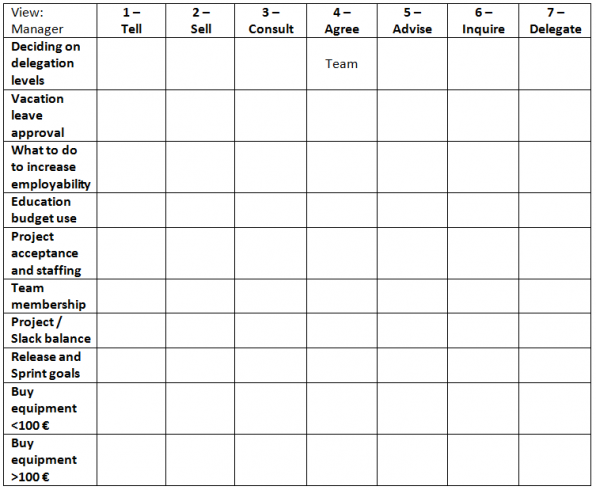 During the Delegation Poker, some interesting discussions took place. For example, I wanted to put the “What to do to increase employability” (so the decision which books to read, what trainings to choose, what to learn next, etc.) on “Delegate”, because I believe everybody should do this alone, not necessarily with the manager. The team however initially wanted “Consult” because they wanted to incorporate my thinking. We finally agreed on “Advise”, which leaves the responsibility with the team but allows them to consider my suggestions.

Another interesting discussion arose when we looked at project staffing. The team initially voted for “Advise”, because they thought everybody should choose their favorite projects. While I generally agreed, I didn’t want to let go of the final say in case the company’s survival was threatened. On top of that, I am formally accountable for our revenues. In the end, we agreed on “Consult”. Today – approximately 2 years later – I would probably accept “Advise” as well, because trust and ownership has risen considerably within the whole team.

The final and still valid board has the following entries: 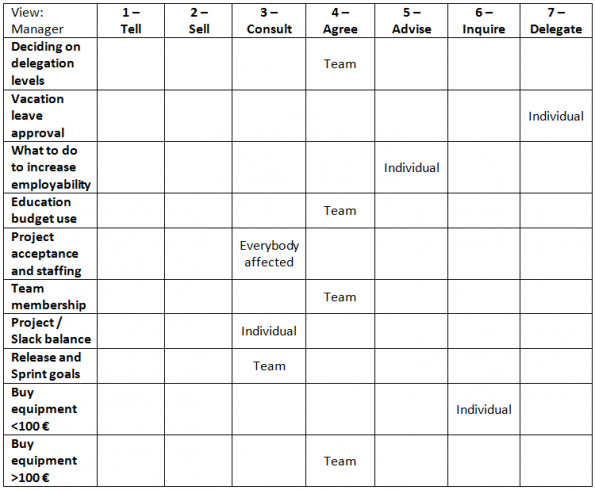 Whenever we show this board to someone, especially people working for a big company, the board results in three critical discussions: How can it work that vacation leave is a seven? How can you handle a four in team membership? How is it possible that you give budget power to the team? Let’s look into these questions.

How can it work that vacation leave is a seven?

For us, this is straightforward. We are a consulting company, so the primary dependency is with the customer. If the customer is happy, why should I as the manager oppose? This would only increases my administrative overhead. Therefore, every single consultant in my team chooses their own vacation timing and approves it for themselves. We only had a problem around Christmas: Our technical system still requires me to hit a button for holiday leave to become effective. Last Christmas, I was the first to leave, but some team colleagues had not yet entered their holidays into the sytem. So I still had to hit the “allow” button several times during my vacation time. This is a shortcoming of the technical system, not of the Delegation Board, and we are working to solve this.

How can you handle a four in team membership?

This is actually a key factor for team trust. Whenever anybody wants to join our team, no matter if he is an internal or an external candidate, we conduct a two-step process. Mostly, both steps happen on the same day. Firstly, I screen the candidate (sometimes this is the second step and the team gets the first call). Since I do have veto power, I can exercise it right away. This keeps the dismal candidates away from the team. The ones that are acceptable or even good are passed along to the team. This means we go to the team room and start a friendly discussion with the candidate. If we sense the need for a deeper dive, we challenge the candidate with tougher questions. Usually, we end this with a joint lunch, provide the candidate with clear feedback and sleep it over before we vote on the candidate the next day. This process is very transparent and appreciated by everyone involved. Even candidates who were eventually turned down thanked us for the openness. This experience forges the team closer together and creates a very strong bond of trust. The process does take time. However, if we don’t invest in our people, then what else is worth investing in?

How is it possible that you empower the team with budget decisions?

Neither do the team members want to ask for every single thing they need, nor do I want to validate every small item that needs to be purchased. My team consists of responsible adults who know their own and the team’s profitability numbers, so they are fully capable of making such decisions. We chose 100€ as a reasonable amount everybody can spend on a single purchase, but we probably could triple the amount and it would still work. Bigger purchases are on “Agree”, because this forces the team to discuss the need amongst themselves first. This proved to be quite helpful, because quicker and cheaper solutions were identified. One example: “I want to order a moderation suitcase.” – “Why don’t you take the team suitcase? We can reassign it to you.” – “Oh, I didn’t know we had one…”.

We have now used this board for several years without the urge to change it. I am not completely sure if there isn’t really anything to improve, but we were happy solving such situations on the spot. In fact I believe the Delegation Board is far more powerful than the information printed on it. So far we have not experienced any negative effects. On the contrary, clarifying the decision types and agreeing on delegation levels helped us tremendously. Our advice for you is to just get started and make your own learnings.