Many managers worldwide face the task of doing performance evaluation and defining the salaries for their employees. In an Agile environment, where everything is focused on teams and self-organization, the process is different from more traditional approaches. However, this is easier said than done. You will be familiar with one-on-one talks, with your boss telling you how he views your performance, and what (if at all) your revised is. So how can you involve a team in evaluation and salary distribution of its peers? What we are applying at NovaTec is a 360-degree approach. When you read on, please keep in your mind, that all evaluation and salary decisions are still at delegation level three for us, meaning, as the leader I make the decision after the team has provided me with their input.

Before we can talk about money we need to discuss performance evaluations. We do have a defined career model. It states explicitly what is expected of somebody on a specific level, and what usually must be done to get there. This is not black-and-white, but the model gives a clear direction. For example, when you want to become a “Senior Consultant”, you need to do something to raise your visibility in the market. This might be a couple of Blog posts, speaking on conferences or leading an external community. You can pick any or all of those options. However, if you don’t do any of them, the requirement is not fulfilled and you won’t be promoted, and will be ranked as “requirements partially met”.  When we evaluate somebody, we do it against these criteria.

During the last couple of years we started conducting evaluation workshops in our competence area (=business unit). Some time before the workshop, every team member needs to evaluate themselves and prepare this on sticky notes. The questions are: To what extent did I fill my role? Do I want to be promoted this year? What was special about me this year and therefore everybody should know?

Of course, everybody needs to prepare their evaluation for everybody else in advance as well. You are only allowed to write one sticky note per person, and you need to take a note on where to place it on the following chart so you don’t change your mind through group pressure: 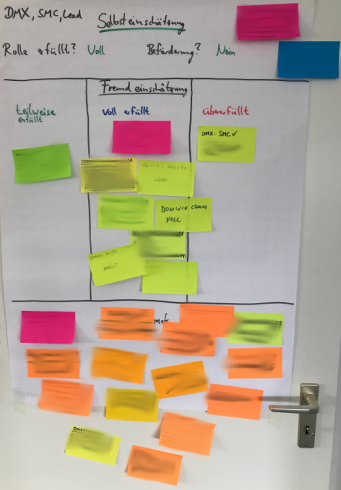 This is my chart from this year’s workshop. The upper part shows the self-evaluation. As you can see, I rated myself as “fully” in my role fulfillment and stated that I do not want to be promoted this year. The sticky notes in the upper right corner outline why I believe to have fully met the requirements and what special stuff I did. The middle part of the chart shows the opinion of the team. Left column means “partially fulfilled”, middle column “fully met” and the right column represents “requirements surpassed”. The lower part of the chart (or door…) consists of feedback that does not go into the promotion or salary decision. It is more like remarks and suggestions than a hard evaluation.

During the workshop, everybody has their own flip-chart prepared. We walk around the room together and deal with one person/flip-chart at a time. First, the owner of the flip-chart explains their self-evaluation. Some do this briefly, others elaborate a little bit longer, so we use timeboxes here. People work together all the time, there shouldn’t be the need for lengthy descriptions. Then, everybody puts their prepared sticky note into the relevant column and explains the content. They answer questions by the evaluated person and continue by putting up their open feedback as well. When all questions are answered, the next person puts up their feedback. I am always the last one to put up my opinion (in a different color), since I am the leader and I don’t want to anchor anybody with my thoughts.

This works well for us, because we function well as a team and have a high level of trust. Some people were ranked as “partially fulfilled” and were okay with it, which also means people put criticism up the charts as well. In most cases, the self- and foreign evaluations matched nicely. One big benefit for me as the person accountable for the appraisal is that I can verify my impression against the team opinion. In two cases, I slightly adjusted my evaluation after this year’s workshop. This would not have been possible without this format and increases the level of fairness in my opinion.

While promotions are easy to decide on (if everybody agrees that you surpass the requirements of your current position, we do a quick check against the requirements of the next career level and just promote you), salary is not. We experimented with salary formulas a little while ago, but could not agree on implementing one. So last year we ran an experiment after our evaluation workshop. We put up glasses with names for everybody in the room. 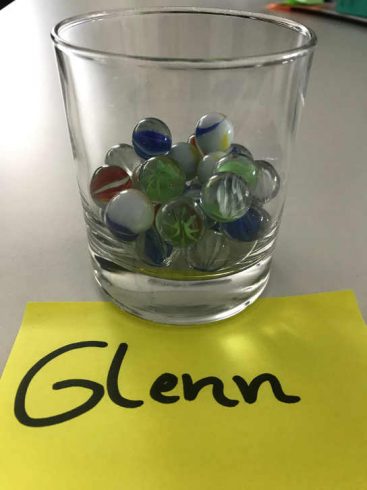 Then I distributed a fixed amount of marbles to everybody. There were more marbles than people, but the number wouldn’t even out, so people had to make a decision. I told the team to imagine a fixed amount of “X” represented by the marbles and they should go ahead and distribute them. This would be a source of input for me when making last year’s salary decisions. My team didn’t know each other’s salaries or the amount represented by each marble.

It was a disaster. Due to the insufficient information space, the team could not make sensible decisions and perceived the whole situation as “unfair” when they realized they couldn’t give everybody the same number of marbles. We had heated discussions on this after the workshop and decided not to repeat the experiment.

Interestingly, when taking out the evenly spread amount of marbles, the tendency expressed by the team pretty accurately met my own preparation. So the method kind of worked, but pushed the team apart rather than pulling it together.

This year, we tried a different experiment. We still don’t know individual salaries, the total amount available for distribution or even the salary bandwidths for specific career levels. Our main goal is to treat everybody in a fair way, and we realized we didn’t need those numbers to achieve this. I prepared an A4 sheets with the names of everybody and a line with three sections for every name. The center section always represented the current career level, the section left the lower level and the section right the next higher level. The first step in the workshop was for everybody to mark the “target salary” (note: not the current one!) for everybody with an “X”. Nobody was allowed to talk, in order not to anchor anybody. I prepared my own sheet in advance in order to make sure I wasn’t anchored by the team. When everybody was done, we copied the information from the charts onto a flip-chart. 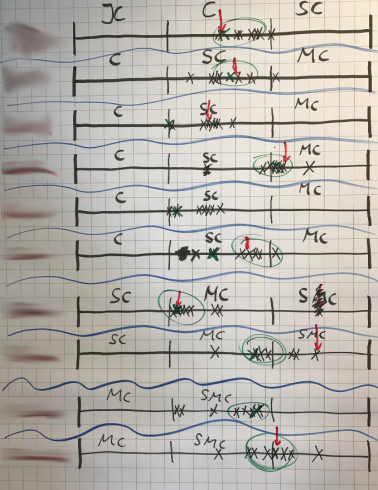 Salary distribution based on feedback

Each person’s own evaluation was marked with a red arrow (two people were sick, that’s why their arrows are missing). Then, we moved through the chart, person by person. We noticed the crosses, differences and spread. If the person wanted to ask a question, they were free to. Usually, people wanted to know who were the outliers on both sides and why. In all cases, the team mates were happy to come forward and offer explanations, even though this was completely voluntary. When this discussion subsided, I added my own prepared opinion (green X). In most cases this matched nicely, but in some cases there was a difference. Since I knew the team’s opinion on salary and performance, I now could reevaluate my own opinion.

For the cases with closely clustered opinions, I circled the cluster. This symbolized to the employee that the target salary will be somewhere in this cluster. The workshop only took one hour and ended with me acknowledging to sleep it over.

Today, three days after the workshop, I decided on the salaries. I have to say it was much easier than in previous years since my confidence in finding a fair solution for everybody was increased through this workshop. This was a very positive experience.

Please note that salary increases depend not only on the target salary, but also on the current salary. Only when we know both numbers, can we judge if we should increase a salary or not. The workshop above only dealt with the target salaries. We just started thinking about how to deal with this next year.

Our overall experience with doing workshops to evaluate performance and judging target salaries is very positive. It eases my job and is transparent for the rest of the team as well. While we do it on delegation level three so far, we are working towards level four or even five in the future.

Next time we conduct the performance appraisal session, we want to change a couple of things. Most importantly, we want to remove the “feedback” part, because we want to clearly separate feedback from evaluation. Instead, we want to put up a section for praise, because right now we are all focusing on the last 2% that are missing to reach a specific level, which leads to the impression of not acknowledging accomplishments for some people. We are also discussing if we should do this type of workshop more than once per year.

Keep in mind that the prerequisite is a high level of trust and courage within your team. If you want to try it yourself, please let us know how it went!