The easiest approach is “the last change wins”. This implies you just ignore any change that might have taken place between reading and updating the record. However this leads to the so called “lost update problem” – which for must business scenarios is obviously not applicable.

Therefore we need a more advanced solution how to handle concurrent access. Hence there are two possible approaches:

Typically distributed systems are stateless, thus the pessimistic solution does not really fit. One reason for this is that most distributed systems use REST or at least HTTP for communication – which itself is already stateless. Therefore the optimistic concurrency control is the preferred approach.

In this post I will describe how optimistic locking with RESTful communication is implemented. Spring Boot is used for the back end (micro-)service and as a client – or so to say service consumer – we’ll use an Angular 2 web front end.

Preliminary remark: For reasons of simplicity the following steps focus on how to handle updates (done with the HTTP verb PUT). Nevertheless the same principle may be adapted for deletions (done with DELETE) or other non-safe modifications (e.g. POST or PATCH).

As already mentioned for optimistic concurrency control we need a way to provide the clients with tokens containing versioning information of the data they receive.
Like most modern distributed systems we use the de facto standard for synchronous communication: The RESTful application paradigm. And generally speaking REST is done via HTTP. So it is worth to have a closer look if HTTP provides any mechanism that might be suitable to handle these tokens.

And – good news – HTTP1.1 comes with an appropriate header field called ETag:
“The ETag or entity tag is part of HTTP […]. ETags can also be used for optimistic concurrency control, as a way to help prevent simultaneous updates of a resource from overwriting each other.” (see Wikipedia)

Accordingly if a REST client GETs a resource the back end service sends the versioning information in the response header field ETag:

The ETag may contain a hash value of the resource’s content, a hash of the last modification timestamp or even just a revision number.

The service consumer must cache the received versioning information and when calling a PUT operation add it to the request header field If-Match.

Basically the If-Match header makes the request conditional. In our case the back end service must check if the condition “resource was not modified” is fulfilled.

If the condition is satisfied, that means the update is possible, the HTTP status code 200 (OK) with the updated resource as payload is sent (or alternatively 204 (No Content)).
If however the update cannot be applied because the resource was modified in the meantime the service will return the status code 412 (Precondition Failed). Receiving that status the client has to decide how to handle the conflict – by reloading the resource and discarding or merging the changes.

Remark: The HTTP header fields ETag, If-Match and If-None-Match are also used for web cache validation, what will not be described in this blog post (further details).

Usage of the JPA Annotation @Version

So far we have seen how the versioning information is transmitted between service provider (our back end) and the service consumer (our client). But where do we get this information?

A common approach is to use a collision-resistant hash function of the resource’s content. This generates a value like shown in the screenshots above.

But if the data is persisted in a relational database using an ORM framework like Hibernate (or generally speaking the Java Persistence API (JPA)) we may retrieve the revision number in another way:
JPA provides the @Version annotation to mark a technical attribute for managing a dedicated revision number (see line 4-6):

Basically the entity’s version attribute and the associated database column are managed by JPA and are used to detect conflicting updates. Therefore JPA already takes care of incrementing the revision number with every update:

We will go into detail about this in the next chapter. For now let’s just capture that this revision number is exactly what we need as token to hand out to the client via the ETag header.

The following sequence diagram sums up the described usage of the HTTP headers and status codes together with the entity’s version: 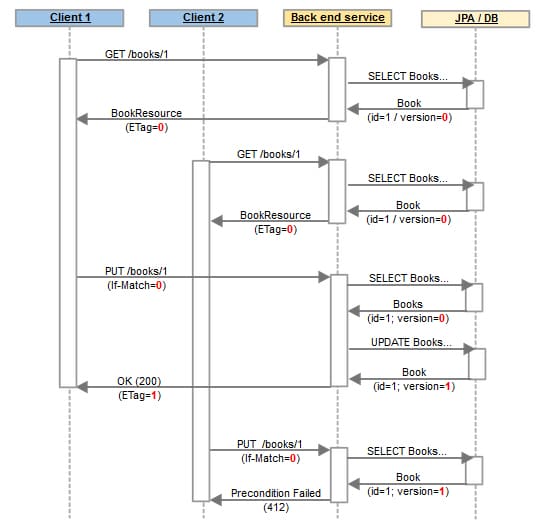 Well, enough theoretical explanations – let’s start implementing.
Our service providing back end is implemented with Spring Boot. More specifically we have a Spring MVC RestController that adds and extracts the required HTTP headers and does the update condition check.

When looking for ETag support in Spring you’ll find the ShallowEtagHeaderFilter. This filter may easily be added as a configuration to your Spring Boot application:

The filter adds an ETag header to all GET responses containing a hash value of the resource’s content:

Looks quite convenient, doesn’t it? But unfortunately this is only a shallow implementation of the ETag mechanism. It is sufficient for web cache validation using the If-None-Match header.
But what we need is support of the If-Match header and this has not yet been implemented in Spring. So unluckily this filter won’t help and we have to implement the mechanism ourselves.

The good news, though, is as we wanted to use the entity’s version anyway setting the ETag header in the RestController method is pretty easy:

In line 3 the Spring Data Repository reads the Book entity for the requested identifier. The Book’s version attribute is then set to the ETag response header field (see line 9). We just add two double quotes to make the value compliant to the HTTP specification.

When performing a GET the response header field now contains the Book’s version:

Extracting the If-Match request header and checking the constraint

All right, we are now able to send the revision number within the ETag to the client. The client returns the value when trying to update the resource with a PUT operation.

Therefore we have to extract the transmitted value and see if our update constraint is fulfilled.
The steps that need to be realized are shown in the following activity diagram: 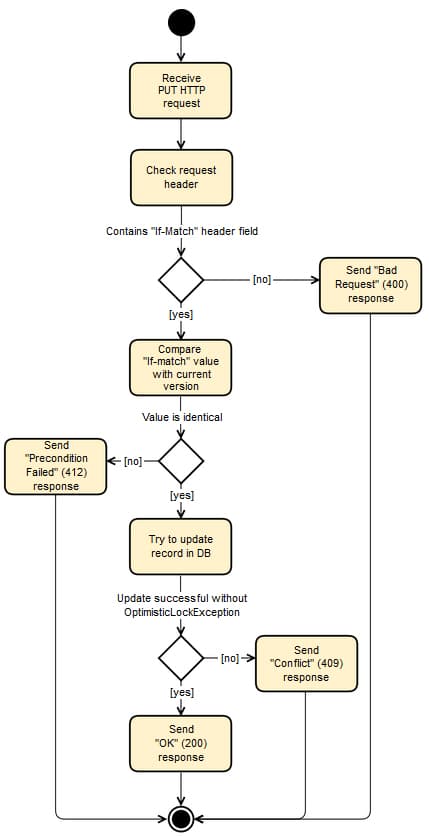 First of all we need to extract the value from the If-Match request header field. If the PUT request does not contain the header it is not valid, therefore the HTTP status code 400 (Bad Request) is returned.
In case the value is found it is compared to the latest version of the entity. If these values don’t match the status code 412 (Precondition Failed) is sent and processing is done.
As soon as the two values are the same the resource is updated.
Even after comparing the received version with the current version – that means after reading the stored record from the database and before updating it – there might be another transaction that changes the record in the very same moment. Therefore it is still possible that an OptimisticLockException occurs. In this case the HTTP status code 409 (Conflict) is returned.
Supposing that the update is executed correctly the status code 200 (OK) is sent to the client.

The code fragment below shows the realization of the Spring MVC RestController method:

In line 8 the If-Match value is extracted. If it is found it is matched against the Book’s current version – complemented with the ETag specific double quotes (line 12).
If the values differ the status code 412 is returned. If however the values are identical we try to save the updated Book entity (line 16-19).
The updated Book resource is added to the payload of the response and sent with the status code 200.
The OptimisticLockException that might be thrown by JPA/Hibernate is caught and mapped to the status code 409 (line 24-26).

Of course this example just shows the prototypical implementation. When adapting it for a real-life scenario I suggest the following optimizations:

Implementing the service consumer with Angular 2

As stated previously the client must cache the versioning information received in the ETag response header and when calling a PUT operation return it using the request header field If-Match. In this last chapter I’ll show how this is done using an Angular 2 front end.

For dealing with the received data we create a resource class – which behaves almost like a DTO. This BookResource would look like this:

Please note the technical attribute eTag which will be used for caching the received value (in line 7).

The API layer of the Angular 2 service consumer uses the Angular Http client to perform the REST operations. Therefore we create a class ApiService containing the method to GET a single Book from the back end service:

Line 7-9 shows the implementation of the method itself.
Parsing the response to JSON and mapping it to the BookResource is done in the helper method mapResponse (line 13-23). So far this approach corresponds to the Angular documentation. The specificity lies in line 21 where we extract the value from the ETag response header and add it to the JSON string so it is mapped to our BookResource.
Remark: Of course the error handling (line 15-17) has to be improved for a real-life application.

So far we have read the ETag value and cached it in the BookResource. Now when calling the PUT operation we need to send it back. Therefore we add a put method to the ApiService:

In Line 3 you can see how the value – which is handed over as parameter – is added to the If-Match request header.

To call this method you have to provide the eTag parameter, which can easily be selected from the BookResource:

That’s it, we have extracted, cached and returned the versioning information.

In this blog post I showed how distributed optimistic locking using REST, Spring Boot and Angular 2 may be done.
Summarizing I would like to emphasize the importance of the HTTP header fields ETag and If-Match. Even if another back end or client framework is used this mechanism still provides a standardized way to transmit versioning tokens between service provider and consumer.

How to push Dynamics365 logs into elasticsearch SIEM System