Orientation inside complex buildings and grounds, efficient familiarization to new surroundings, and reduction of dependencies on personnel. Augmented reality makes Indoor Navigation possible without additional hardware and guides you quickly and easily to the desired destination.

Your Challenges with Indoor Navigation

Keeping one’s bearings is not always easy in a new environment. Especially large and complex buildings such as industrial plants, shopping centers, or office complexes, tend to take on the character of a labyrinth and present individuals particularly unfamiliar with the location the challenge of finding good and fast orientation. Where is the machine you are looking for? Where is the desired shop or meeting rooms?

Maintain an overview in unfamiliar surroundings

To solve this problem, technicians, service workers, customers, and new employees usually receive a map with brief descriptions. It takes time to find your way; delays due to lack of orientation are common. Information on machines and those responsible for them may also not be communicated correctly. If the documentation is inadequate, the right framework must first be painstakingly determined before the actual work. Just one of many problems that arise from working in unfamiliar surroundings.

The Advantages of Using Indoor Navigation

Why augmented reality is helpful in Indoor Navigation

By using Indoor Navigation with the aid of augmented reality (AR), people can be guided virtually and supported in finding their way around in unfamiliar surroundings. Unlike conventional solutions that use Bluetooth beacons, WiFi, or visible light communication (VLC), only a smartphone, tablet, or data glasses are required for navigation by AR. This allows users to navigate to a certain position without having to read a map or ask for help.

Your specialists or customers can find the location they are looking for without spending a lot of time – and won’t have to worry about missing information. Another advantage of Indoor Navigation is that it is not just a one-time thing: It can be accessed flexibly at any time and can support orientation on an ongoing basis.

In addition to the actual functionality of the navigation, information such as contact numbers and documentation can be displayed directly on a device or at the desired location with the aid of augmented reality. This will make the search for important information easy and help your specialists work efficiently.

How is Indoor Navigation structured?

Every individual must be able to navigate reliably with Indoor Navigation – both in buildings and on the grounds. Current Indoor Navigation systems are often operated in a very complex way using Bluetooth beacons. These are, however, imprecise in determining their position or are still in development. Our Indoor Navigation is designed specially for you, is accurate up to a few centimeters, and can be configured to your individual applications.

To help you understand how such Indoor Navigation works, we have summarized the most important functions for you below.

The illustration below shows that the application is broken down into two functions. The first function positions the spacial anchors and supplies them with information.

Spatial Anchors
Spatial anchors are part of the augmented reality technology. These are fixed points in a real environment that the AR system identifies and can anchor to a certain position. The special feature of these spatial anchors is that they retain their defined position even when the user moves and when the application restarts. So, the 3D model cannot “slip”. In addition, spatial anchors are also suitable for multiple users. This means that several users of the application can see and interact with the same information at the same position on different devices.

To accomplish this, in step 1, many prominent and contrasting points such as corners, edges, and object features are identified in the field of vision and linked to each other. This produces unique point clouds with a three-dimensional constellation of points. The second step consists of transferring these point clouds to the cloud using a cloud service.

Communication channels and connections to the required services.Source: Novatec internal

The second function concerns the user of the application who has to find his way inside the building: If this user (step 3) searches the surroundings with his system, his device also calculates a point cloud. Because the methodology is the same, the same locations also obtain a very similar point cloud as a result. By comparing the information received in this manner with that in the cloud, locations can be recognized and information on the surroundings determined. In the last step 4, the user is shown the correct spatial anchor with the objects placed there and, if applicable, additional information at the right place. This mechanism is the core of Indoor Navigation and shows how the services communicate with each other. 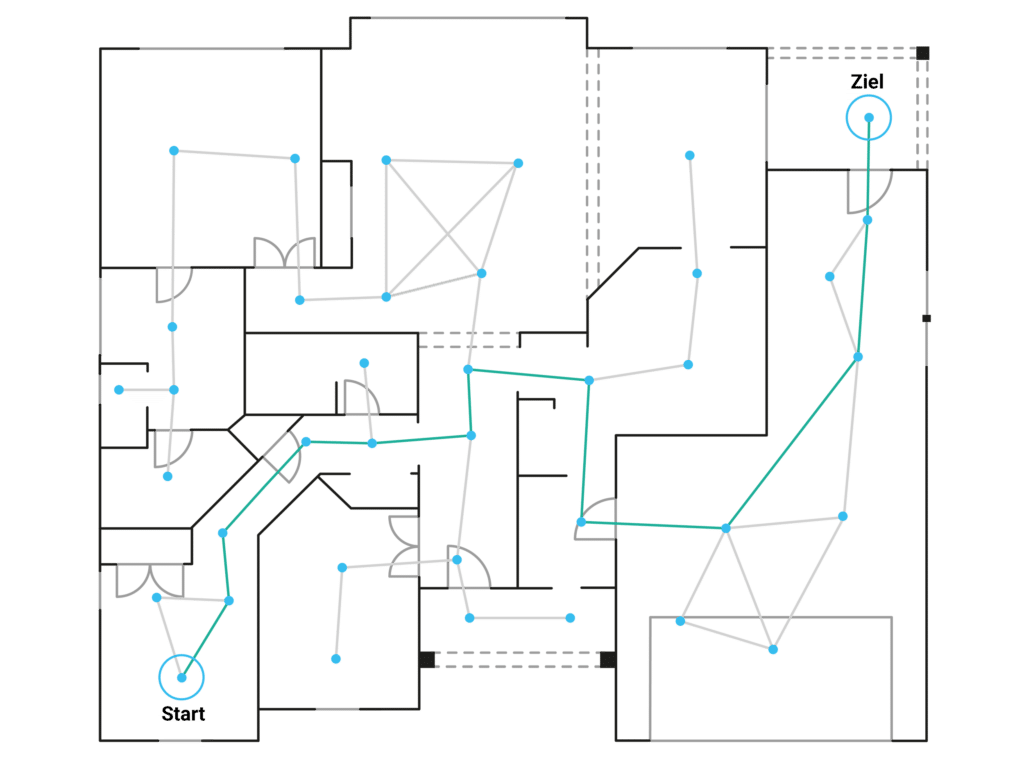 Navigation through a floor by spatial anchors.Source: Novatec internal

The starting point is linked dynamically to the current location so the user can start his navigation anywhere on the floor. A network has been established by placing the spatial anchors throughout the entire floor. The links in this network are used to enable successful navigation. A green line appears on the links between the spatial anchors to indicate the shortest way from the starting point to the destination. 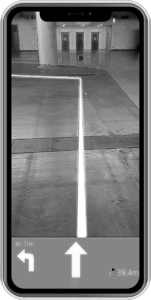 The guiding line appears in the camera image via augmented reality and shows the way to the next spatial anchor without any beacons. In the lower part of the application, the user receives specific instructions comparable to those of a GPS. In this example, the user is instructed to walk forward a bit and then to turn left after a few meters. The current distance to the destination appears in the lower right of the application and is indicated by a small flag. Even in complicated buildings and confusing machine shops, this enables reliable navigation that brings the user safely and unmistakably to his destination.

Together with you, we can discuss the device that is best suited for your application. We take a gradual approach to reveal the perfect solution for you.

Have we piqued your interest? 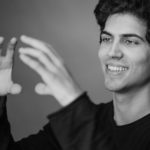